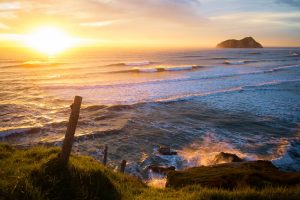 What part of the world is the first to say hello to the morning sun? It’s right here in New Zealand. The East Cape, north of Gisborne on the North Island, is the first place on Earth to witness the sunrise each day.

How is this possible?

In 2011, Samoa made the decision to leap an entire 24 hours into the future, moving its position by a day on the international dateline. Samoa used to be the last place on the planet to see the sun sink into the horizon. Now, it’s technically the first country to ring in the New Year.

But this does not mean that Samoa is the first country to see the sunrise. Because of the curvature of the Earth, the East Cape still holds this distinct honor. Though this is still being debated, Kiwis take great pride in being the first to greet the sun every morning.

Where to go to see the world’s first sunrise

There are numerous places on the East Cape from where you can gaze upon the world’s first sunrise. The eastern tip of the cape, Hicks Bay, is a good spot. Watch the sunrise from the East Cape Lighthouse and stay at the Hicks Bay Motel Lodge.

Mount Hikurangi, the tallest non-volcanic mountain on the North Island, is traditionally described as the first piece of land on the planet to be kissed by the morning sun’s rays. The peak of Mount Hikurangi became particularly famous during the celebrations for the dawning of the new Millennium.