CHOPPERS TRACK This old maori track takes you zig zag down the ancient bluff to Onepoto Beach.   ONEPOTO BEACH There is safe swimming below the motel at Onepoto Beach.  A short drive or walk the track.  Share, support, embrace one another while experiencing a walk down Choppers Track to the beach. Pretend you can see Zachariah Hicks telescope sighting the Bay in 1769! Play on the rocks and sandy beach.   GIANT PURIRI This short track is located across the road from the motel.  You might see a glimpse of the yellow puriri butterfly in summer.  Together investigate new cultures to see what nature they have preserved on this ten to fifteen minutes return walk to an impressive Puriri tree the size of a small car.   HINEMAUREAU WHARF AND FISHING There’s fish, fish and more fish! Get your fresh catch from the rocky ledges around the Hinemaureau Wharf.  Also referred to as the Hicks Bay Wharf.  We sell bait, fishing supplies and fishing poles at our small shop on site. Getting There: From Highway 35 turn off at Wharf Road and carry on over a one lane bridge. Continue past the old freezing works to the Wharf car park. For more information on rules and quota see MAF. 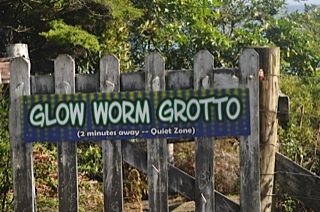 There is a glowworm grotto located on the grounds at Hicks Bay.  A small Theatre in the side of the bluff.  The glowworms come out and glow at night only.  The female blinks as the gentlemen glow, only when they are hungry of course.  It is about two minutes down the steep steps.  It is a quiet zone and once settled they come out and glow for you.  Don’t forget to tilt your head up and look up to the night sky.  Nature at it finest and its free.     Glowworm Grotto Entrance Hicks Bay | Out East 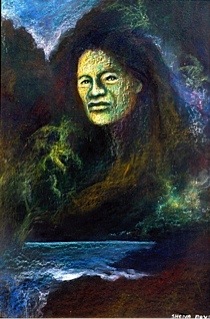 In the lounge of the motel is twenty portraits called “Tangata Whenua”.  It is a New Zealand officially commissioned project No 2,406 to mark the 150th year celebration of the signing of the Treaty of Waitangi.  It is a collection of maori portraits by Shona Hammond Boys QSM, which toured New Zealand 1990 1992 as a Queen Elizabeth 11 Arts Council Project.  The exhibition avoided the commercial gallery and art scene and travelled from marae to marae with the occasional museum visit.  You can locate more details about this art work on the “Explore” section of our web site.   Tangata Whenua Lead Portrait Taranaki | No photographs allowed

HOME OF THE FIRST SUNRISE ON THE PLANET! Create and build strong vibrant bonds in the peaceful early hours where the worlds sunrise first meets the horizon. Take a walk or short drive up the hill to the Scenic Lookout (brown signage), or walk part way down to the Glowworm Grotto. The first corner is a nice view of the sunrise looking out to sea.  The most popular option is to drive to the East Cape Lighthouse.   TE WAHA O REREKOHU New Zealand’s most ancient pohutukawa tree, more than 600 years old is found in the tiny coastal settlement of Te Araroa. And stop into the regions art gallery, Gallery 57 Te RuruKainga and hunt up some unique and authentic local art on Waione Road, Te Araroa.   EAST CAPE LIGHTHOUSE GUIDE Getting There public access: To reach the easernmost point of mainland New Zealand, travel the coast on a sealed and unsealed road from Te Araroa. Then pass several tubular concretions of ancient plumbing and follow the foreshore to the car park and toilets. You will have passed the path (left) to the Lighthouse once parked. Go through the gate, then up the steps to view inland to the Raukumara Range and seaward to East Island. From time to time the gate is chained and locked. Your access is by climbing over the gate. During the busy season some travellers drive through the gate and that is why it is locked.   TUBULAR CONCRETIONS Investigate nature attractions of ancient plumbing from the Miocene-millions of years ago – era when Antarctica was covered by ice and the northern continents were cooling rapidly. Tubular concretions subsurface cold seep plumbing of Miocene Sediment (doughnuts) can be discovered along the foreshore to the East Cape Lighthouse.   MOUNT HIKURANGI The Hikurangi track is located on Pakihiroa Station 30km from the turn-off from Highway 35 (Tapuaeroa Road). This track runs through private land and may be closed from time to time. Inquirys for access 06-8648660. More information about Mount Hikurangi can be found on DOC and Ngati Porou.

TUNI – E – TE IKA “Unidentified Flying Objects have received considerable attention. Most of us on occasions have seen large meteorites or unusual light effects from planets and stars and wondered. Such was the case on Matakaoa Point in Hicks Bay in 1981 when a family watched an unusual effect in the North-Western sky. This prompted them to relate the story of a comet-like object that occasionally appears to the Ngati Porou people prior to the death of an important person or some auspicious event. Named Tunui-e-te-Ika this phenomenon appears as a flowing greenish light with a long blazing tail flying horizontally rather than in a downward sweep as of a meteorite. This was seen by them once prior to a V.C. award.”* Here’s one of the videos I have filmed above the motel.

TE AUMI You will find safe swimming at Onepoto in Hicks Bay. On the hill about two km above the motel towards Te Araroa stands a hugh rock figure facing north Te Koau and down below in the sea is the tide rip, Te Aumiti. A bird was sent to test the tides of the land. When the bird flew low to study Te Aumiti his wing was caught in the swirling waters and he was turned to stone. TE KURI “Midway between Onepoto Beach and Te Koau is a place named Te Kuri. It is a picuresque spot with a clear stream, karaka and pohutukawa trees and two long, narrow sea channels that come in along the sides of a large rock projecting out into the sea named Kauae-roa (Long jaw). There is a cave at Te Kuri with a vertical shaft leading to it. This cave has an ocean-side outlet and certain high-born people were laid to rest in it. When the bodies were being lowered down into the cave, a howling noise would emanate from the depths like the mournful howling of a dog. The basalt rocks of Te Koau have an overburden of limestone and in this limestone are several Maori Burial caves, some with vertical shafts. One “Raepao” now lies beneath the Hicks Bay Motel Lodge. No doubt the noise was caused by the wind being funneled through the cave. Other interesting features of Te Kuri are the old walking track that zig-zags down the hill (Choppers Track), the old kainga site on the terrace above the sea and an unusual pothole at the edge of the high-tide mark. Visit Te Kuri, it is worth the twenty minute walk from the beach. It is one of those secluded spots which, while you are there, belongs to you alone.”* *Wharekahika A HISTORY of HICKS BAY BY L. LAWSON Area Information