Home » Home of the First Sunrise

Home of the First Sunrise 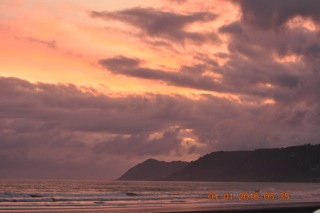 First Sunrise of the Year 2016

Why is the First Sunrise So Important?
Whether for religious beliefs or simply the evolution of marking time, man has always understood the significant role the sun plays in our everyday lives. Religions of all cultures and backgrounds very often looked to “creatures” like the sun, water, earth, and fire, to find spiritual meaning and a transcendence. Regardless of cultural background or religion, however, the sun was universally recognized and respected for its life-sustaining light and warmth.

In ancient religious writings, the rising and the setting of the sun also established the basic unit for marking time; a day. An example of this is found in Genesis 1: 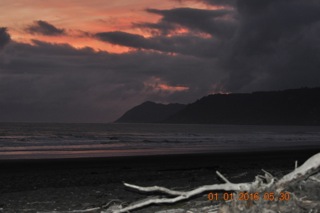 Then, in 1500 B.C., during the Egyptian period, man had invented the sundial to help mark time during daylight hours. The sundial is the oldest known scientific instrument to measure time. When used correctly, a sundial can help a person measure time intervals throughout the day. It works when the sun’s rays (which travel 149,597,870,700 metres from the sun before reaching earth) hit an upright piece of the dial and cast a shadow onto the base of the unit. The earth is constantly moving in relation to the sun, which causes the shadow on the unit to change positions as time passes. Now days, with modern methods of marking time, sundials are mostly used for yard décor.

When we take into consideration the deep religious significance of the sun, marking time, and defining a day, it isn’t difficult to understand why it’s such an amazing privilege that the first light of day of every new year is first experienced right here at East Cape! 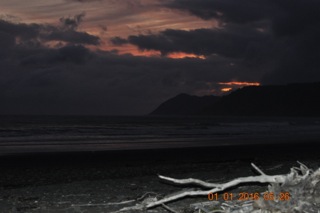 How Do We Know That East Cape Experiences the First Sunrise?

The daily dance between the Earth and the sun begins each year anew on the morning of January 1st as the Earth twirls around on its tilted axis to welcome the sun’s first rays over the horizon. Throughout the year, the Earth makes its journey around the sun in an elliptical pattern. During the summer months here in New Zealand, the Earth spins faster than average because is closest to the sun while during the winter, the Earth is furthest away from the sun and moves slower than average. This pattern, along with Earth’s tilt at 23.5 degrees, means that the sun will rise in a slightly different pointe across the horizon throughout the year until it ends up back at East Cape when the calendar starts over.

Calculating where the first rays of sun hits the planet isn’t as simple as what you see on that two-dimensional time zone map you likely studied in school. The earth is spherical, tilted on its axis, the surface isn’t flat, and the atmosphere isn’t void of vision-altering matter. Add that to the fact that the earth is also spinning and orbiting around the sun and you’ve got a few more details to consider when calculating who gets the first rays of sun.

Time Zone
The first factor to consider is the time zone. During the 1884 International Convention, which was held in Washington D.C., the standard was established for standardized World Time. The International Convention appointed Greenwich, England, to be the center pointe at zero degrees longitude (the Prime Meridian). Locations to the west of the Prime Meridian subtract up to 12 hours while locations to the east would add up to 12 hours when determining time zone differentials.

Fun Fact
Unlike the Prime Meridian, which is a straight, vertical line at 0 degrees down one side of the earth (Greenwich Time), The International Date Line is jagged so that countries and territories would all be on the same day to avoid confusion. Due to this jagged boundary, there are actually two hours each day where three different days are observed at one time!

Hemisphere
New Zealand is also located in the southern hemisphere, and because of Earth’s tilt and its location in orbit in relation to the sun from December 31st, through January 1st, the first fiery rays of brilliant light are first seen from East Cape. The further south you go, the earlier the sunrise can be seen until you hit Antarctica where the sun is out all day long during some parts of the year.

New Zealand’s location in the southern hemisphere near the International Date Line, and the angle of earth’s tilt when the calendar starts over on January 1st, puts East Cape, New Zealand in the direct path of the first sunrise.

Elevation/Altitude above Sea Level
Think about being in the audience at a theatre. You could be in the first row seat, but if there is a prop partially obstructing your view, the person sitting a little higher a few rows back will actually see much more of the stage than you will, even though you are technically closer to the stage.

What does this have to do with the first sunrise? The higher above sea level you are, the earlier you will receive the first rays of the sun. To be able to compare apples to apples, you first must make some adjustments to the time of sunrise to accommodate the altitude factor. It’s a square root calculation, not a linear one, so you must consider that:

This means that for each metre above sea level the land sits, the minutes you subtract to compensate for the time of sunrise increase exponentially. A cliff standing 4,000 metres above sea level will see the sun rise over the horizon 14 minutes earlier than if they were standing at sea level in that very same spot.

Conditions in the Atmosphere
When the light comes through our atmosphere, it refracts or “bends” the light (think Pink Floyd), which can make the sun appear to be higher in the sky than it really is. The closer the sun is to the horizon, the more dramatic of an effect refraction has on the appearance of the sun’s position. The moment the sun appears to be wholly above the horizon (light refracting upwards, at just over half a degree), it’s actually still entirely just below the horizon. It’s worth noting, however, that the calculated time of sunrise is based more on what we see, and not the actual position of the sun.

Doesn’t Pitt Island claim the First Sunrise?
Pitt Island is a small island off New Zealand’s mainland (longitude 176.10 W and latitude S 44.15), home to less than 50 people. When looking at a flat map, Pitt Island is actually closer to the International Date Line than Hicks Bay. There are some who argue that Pitt Island is actually the first inhabited land in the world to see the sun rise, however, once you consider the altitude factor, Hicks Bay at East Cape gains a slight advantage over Pitt Island. Pitt Island, specifically Kahatura Piont, is between 0 and 1 metre above sea level, while the East Cape Lighthouse on the eastern edge of the New Zealand has a focal height of 154 metres.

What Makes the Breathtakingly Brilliant Colors Across the Horizon?
Watching the first sunrise on the planet should be on every person’s bucket list. Have you ever wondered what causes the stunning spectrum of color across the morning sky?

Our atmosphere is full of oxygen and nitrogen; two very important molecules. When the light hits these molecules during the middle of the day, the light “scatters” and the sky reflects back to our eyes as a blue; one of the shorter wavelengths our eyes interpret. During sunrise and sunset, however, the light from the sun must travel further than it does during the middle of the day, resulting in magnificent reds, purples and oranges near the horizon.

The sunrises (and sunsets) observed from East Cape, New Zealand, are absolutely breathtaking! Without all the distraction and lights from big city life, the atmosphere and ambiance is just perfect for experiencing the first sunrise in the world with someone special… and it’s all happening right here in Hicks Bay!