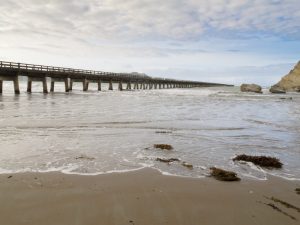 The Tolaga Bay Wharf is an important part of New Zealand history, and both a beautiful and fascinating landmark to visit.

In 2009, the Tolaga Bay Wharf was upgraded to a Category 1 historic place by the New Zealand Historic Places Trust. When you visit the wharf, you’ll be able to read about and imagine just what it was like back when the wharf was in operation.

These days, visiting the wharf you’ll find fishermen out on the wharf, dropping their lines into the water as they sit back, relax, and take in the saltwater breeze. Families also visit the wharf, packing a picnic lunch to enjoy the afternoon in the Tolaga Bay Wharf historical area. There benches on the wharf and some picnic tables also on the shore.

History of the Tolaga Bay Wharf

The Tolaga Bay Wharf was constructed in the 1920s and was instrumental to the development of the town and growing commerce. Due to the shallow waters of the bay, the wharf was extended out 600 meters, which equates to about a half-hour walk if you were to take a leisurely walk to the end of the wharf.

The wharf was eventually decommissioned in 1969, and by 1997, it became considered “beyond economic restoration.” With the threat of the wharf disappearing completely into history, the small town comprising of roughly 850 people worked together to raise enough funds to make safe and restore the wharf for another 40 years, and add in parking, an official entranceway, and landscaping.