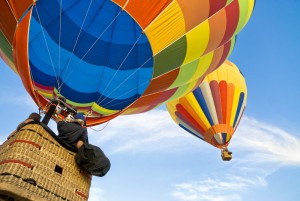 The most amazing event to hit New Zealand skies all year happens in Hamilton/Waikato at the Balloons over Waikato, Wednesday, 25 March through Sunday, 29 March. (Read about 2014 here). Several teams from across the globe gather together to launch their hot air balloons into the morning sky. From students to landscapers and dairy farmers, each come from different walks of life, yet share the same passion for ballooning.

Balloons over Waikato attracts thousands of spectators to the Hamilton/Waikato area, and the numbers rise every year. The 2015 programme of events commences on Wednesday, 25 March at approximately 7:30 a.m. at the Innes Commons, Hamilton Lake, where balloons begin to fill and launch en masse. Weather permitting, balloons will take to the skies each morning around 7:30 a.m. throughout the event. Several other activities will be going on during the week which are outlined here.

Each year of this event presents some amazing one-of-a-kind balloons and this year is no exception. Special shapes for 2015 include an ark full of animals, a pirate parrot, and a lion. Photos and information on this years’ pilots can be found here.

The Zuru Nightglow at the University of Waikato – 28 March

The highlight of the week is the Zuru Nightglow hosted by the University of Waikato. Live music and an orchestrated glowing balloons presentation, followed by a grand finale fireworks display promise quality entertainment for all spectators. Zuru Nightglow begins at 4:00 p.m. and ends with a bang at approximately 9:00 p.m.

This is your last opportunity to watch the balloons of 2015 inflate and hit the skies from Innes Commons.