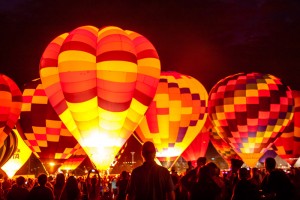 Take the long trek from Hicks Bay to Hamilton and get ready to experience one of the most amazing events you’ll ever see; Hamilton’s award winning Balloons over Waikato! Balloon pilots from all over the globe travel to Hamilton each year to participate in this epic event, with an estimated 130,000 spectators over the 5-day giant festival.

Each morning at 7:30 a.m., the mass ascension of the balloons commences by the lakeside at Innes Commons, Lake Hamilton, where pilots unveil their creations to the community. This is a fantastic opportunity to see the balloons and their teams up close and personal before they ascend into the air. This years’ special shaped balloons come to you from the United States and Belgium, including an elephant, a baby dinosaur, a race car and a princess carriage. They will take to the open skies with approximately 16 other vivid and colorful balloons.

On Saturday 19 March, from 4:00 p.m. until 9:00 p.m., The University of Waikato will be hosting the famous Zuru Nightglow. The Zuru Nightglow is considered “Hamilton’s biggest night out,” featuring live music, food, a hot air balloon glow show, and a grand finale that includes a giant fireworks display. It’s one big event that promises to be fun for the whole family!

For more information on Balloons over Waikato or the Zuru Nightglow, visit their website at https://balloonsoverwaikato.co.nz/ .