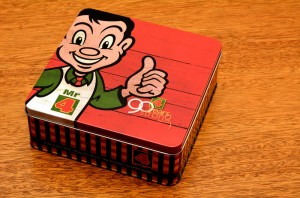 If you’re on holiday and driving across the country, you may have noticed a sign with the red number 4 surrounded by a green box, or a curious little man in an apron bearing the number “4”. Four Square isn’t just any grocery store, but one with a fascinating, local history of providing the Kiwi essentials for more than 90 years!

The Four Square brand was conceived in 1924 by Mr. J Heaton Barker during a business phone call as he drew a square around July 4 on his calendar. By the end of the year, products were being produced under this brand name.

Cheeky Charlie was born in the 1950s, going through several transformations before becoming a nationally recognized icon for the Four Square chain.

Four Square proudly supports and invests in its communities through various organizations. One of the largest beneficiaries is CanTeen, whose mission is to support young individuals who are living with cancer. CanTeen offers a national peer support network, along with professional education programmes and recreational programmes. Four Square helps raise money by selling the bandanas for $4 each.

Traveling in the Gisborne area and need to pick up some essentials? Buy local and check out the local Four Square Store at Rata Street, Te Araroa, Gisborne 4010, Monday through Sunday from 8:00 a.m. until 6:00 p.m.

One Response to “Four Square Store and Cheeky Charlie”