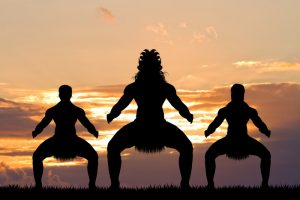 Haka, by definition, is simply a song with dance, or a dance. Traditional Maori haka is rich with meaning, and performed with passion.

Tama-nui-to-ra (the sun god) had two wives – Hine-takurua (“Winter Maid”) and Hine-raumati (“Summer Maid). The son which was conceived between Ra and Hine-raumati and born, was named Tane-rore. Tane-rore is the “trembling” seen in the hot summer air and is credited with the origin of the haka dance. The trembling of hands during this dance is to represent Tane-rore.

Chief Tinirau is credited with the first use of haka in human history. His desire for revenge over the killing of a pet whale. Tinirau gathered a group of warrior women to find Kae; an old tohunga (priest). The only thing the women knew about Kae was that his teeth were crooked and overlapped. When they arrived in his village, the group of women performed the haka for the purpose of provoking smiles from the men observing so they could identify Kae. Kae was then captured and taken back to Chief Tinirau where he was put to death.

The history of haka is deeply emotional, expressed in passion and vigor. Modern day haka performance is still plays a prominent part in Maori culture, often used before sport games, wedding ceremonies or as a dance to welcome guests. The New Zealand Army performs a unique haka honoring the role women play in the armed forces; opened by and ending with female soldiers. It’s a symbol of pride within the New Zealand Maori community and treated with high respect.