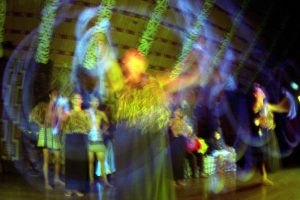 Oral storytelling is where history, religion, myth and art come together. The myths and heroics of their gods are brought to life with extravagant performances drawn from song, chants, props, traditional garb and more. It’s a very deeply emotional experience to witness a traditional Maori storytelling.

The most critical components of Maori oral storytelling often involve the delivery of voice, gestures and facial expressions which convey the tone and emotion surrounding the story. Telling a story was almost never direct, but a drawn out and complicated process, often involving many speakers. The responsibility to preserve and pass down these culturally important stories rested on the shoulders of everyone in the Maori community.

Oral storytelling was often performed a traditional tribal meeting place, such as a central building or open area in the village. It was an important place and new guests would often be welcomed in with a song (the karanga).