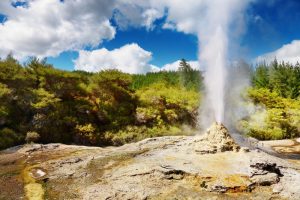 New Zealand sits on an active fault line, resulting in some spectacular geothermal activity. The Taupo Volcanic region is the second most active area for geothermal activity in the world, second only to Yellowstone National Park (United States). It’s no wonder that Rotorua is one the top destinations for travelers, boasting of several otherworldly New Zealand geothermal parks.

Kuirau Park – This public park is located at the edge of Rotorua, filled with plenty of visible geothermal activity, and is free to enjoy. Be sure to stay on the walking tracks for safety.

Tikitere (Hell’s Gate) – Located between two lakes, this is where you can witness a mud volcano and see the largest hot waterfall in the southern hemisphere.

Waimangu – Take a self-guided tour through the bush or take a boat tour where you’ll witness some fascinating geothermal phenomena.

Wai-O-Taupo – South of Rotorua, you can see Lady Knox Geyser and the well-known Champagne Pool with vivid mineral hues.