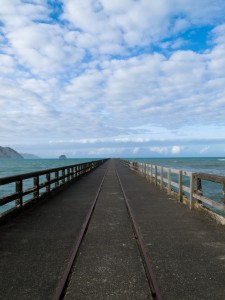 The Longest Wharf in New Zealand

Experience a part of New Zealand history at the Tolaga Bay historic wharf, just over 1.5 hours south of the Hicks Bay Motel.

The Tolaga Bay historic wharf isn’t just any old pier. To the pride of this town, this magnificent wonder recently underwent major renovation and it shows. The wharf extends far out into the bay more than 600 meters, providing you with a beautiful half-hour stretch-of-the-legs if you were to venture out to the very end of the wharf. Several reviewers on Trip Advisor claim that the long walk to the end is well worth the amazing view it offers.

It’s the perfect venue for a fisherman (or fisher-woman) who just wants to drop a line into the waters and sit back as they take in the sea salt breeze and peaceful atmosphere. Entire families will love the wharf and tiny town it represents. For the romantic-at-heart, this would also be a fun place to bring the love of your life for a nice relaxing stroll over the ocean’s waters. You could even pack a picnic lunch to enjoy during you visit.

The history behind the Tolaga Bay wharf is near and dear to many members of the local community. The wharf was originally built in the 1920s and the extra-long length was due to the bay’s shallow waters. The wharf was instrumental in the development of the town, aiding in the local commerce, but it was deregistered as a working wharf in 1969. In 1997, it was declared to be a structure “beyond economic restoration” by the Gisborne District Council. The town, which is home to around 850 people, didn’t feel this was acceptable, and so founded the Tolaga Bay Save the Wharf Charitable Trust, raising over $100,000 to save the wharf!