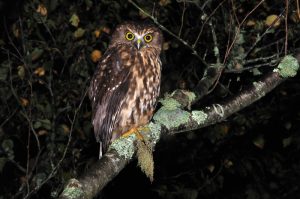 Located near Rotorua, Wingspan National Bird of Prey Centre is the first and only facility of its kind in New Zealand. Wingspan National Bird of Prey Centre was established in 2002, dedicated to the conservation of a threatened New Zealand falcon; the Karearea. Birds of prey share a unique heritage and are an important part of the Maori culture. The conservation centre is open to the public from 9:00 a.m. until 3:00 p.m. daily, with a live falconry display at 2:00 p.m. Tickets can be purchased at the conservation centre.

You’ll be introduced to several species of these beautiful birds, view informational displays in the museum, and catch a peek at the incubation and service areas. Past that, you’ll be led into the main aviary, which is thoughtfully landscaped with native plants and a walkway. A little drizzly? Grab one of their umbrellas and/or hot water bottles and continue to enjoy the aviary. (Be sure to catch the afternoon falconry display!)

Falcons and the Maori Culture

Maori spiritual advisors, or Tohunga, used various birds of prey as a means to communicate with their gods. Warriors would also select to wear feathers from selected birds to symbolize attributes from that particular species when going into battle. The intensely wide eyes of the morepork are also mimicked in various Maori ceremonial dances, such as the haka warrior dance as a way to intimidate their opponents

Wingspan National Bird of Prey Centre’s awareness programmes use an educational approach in hopes to further their mission for successful conservation and cultural appreciation for these birds. For more information, visit their website: http://www.wingspan.co.nz/