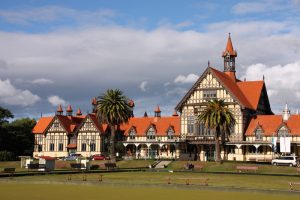 The award-winning Rotorua Museum of Art and History opened its doors in 1988, and was housed inside one of New Zealand’s most beautiful architectural wonders; the bathhouse.

The original bathhouse was built in 1908 and was one of the first bathhouses in the world to allow both genders to take a dip. With the recent New Zealand 7.8 magnitude Kaikoura earthquake on 14 November 2016 (the biggest since 2009), significant damage was incurred in the central portion of the Bath House building. An initial risk assessment was performed and the decision to keep the Rotorua Museum closed until at least April 2017, was not one made lightly.

In the interest of public safety and staff, the museum made the decision to remain closed until a full seismic risk assessment could be completed along with a plan laid out to remedy any potential hazards. Their estimated time to complete this project would bring them to April 2017, however, the final date would depend entirely on the findings.

Why Will This Take So Long?

The Bath House holds a Heritage 1 status, meaning that it will take extra caution to preserve the building’s heritage features. This means reinforcing current structures prior to assessing the work that the building will need.